Familiar, but not the same. 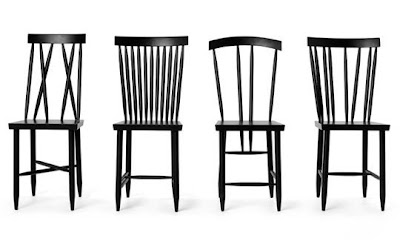 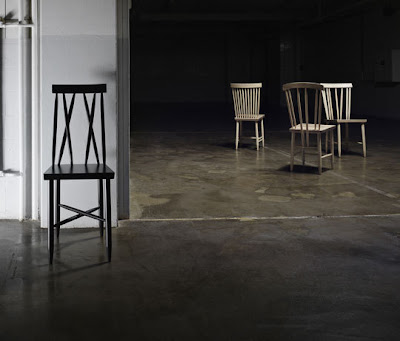 I love stickback chairs. If you are using solid wood (as opposed to metal or plywood or plastic), its probably the lightest, strongest way to build a chair. And, as is so often the case, that kind of efficiency exudes elegance. That's what good modernism does--express a synergy between materials, structure, form and people.
But sometimes modernism can get a bit sterile. Too much uniformity and austerity lacks warmth. I was lucky enough to visit the Eames House a few years ago and was taken aback by two things. One, it was small! They built it on a budget, and knew how to extract the most from the grand and cozy spaces they created. But the other thing was that it was a really, really warm feeling place. Ray and Charles appreciated that synergy between materials, form and people--not a particular style. That synergy permeated everything they did, and the objects and architecture they surrounded themselves with.
This family of stickback chairs by Lina Nordquist has that sense of warmth to me. They're mismatched enough to feel different from each other--but all have their own internal logic. It feels like a family--not a clone army. I like that. Its warm.
Posted by Unknown at 2:41 PM No comments: