Do we need more chairs? If they're like this, then yes. 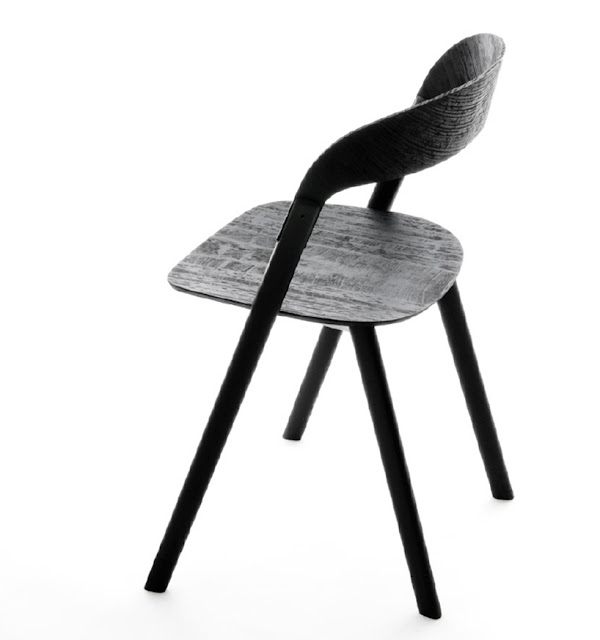 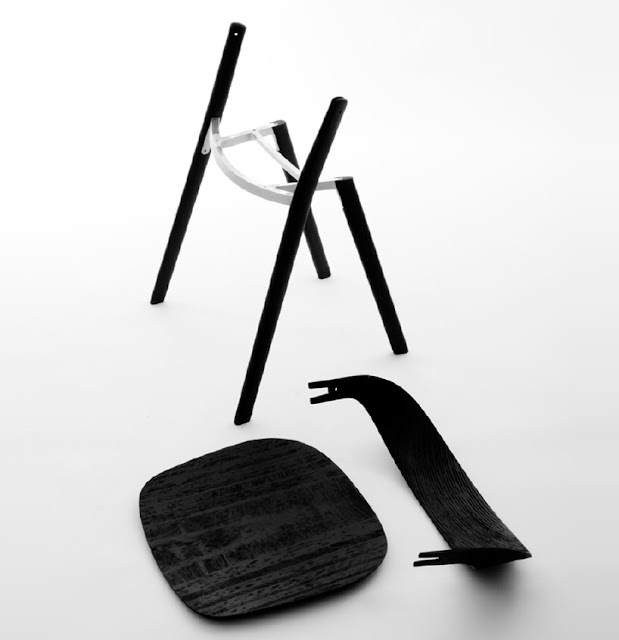 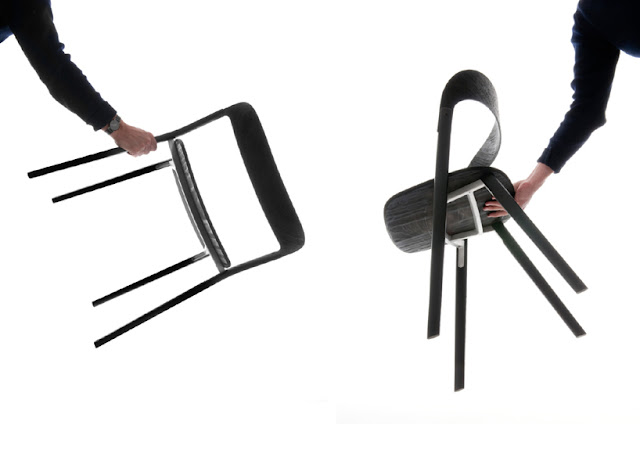 There's something about chairs.  How they look and how they work are rather nakedly combined.  There's nowhere to hide in a chair.  Structure, support, material and gesture are all baked together.

Many designers have done their most iconic work on chairs.  But most of the chairs around us are unequivocal garbage.  Here is this everyday thing that we all use, and yet it's done well surprisingly infrequently--especially considering the variety that exists in the world.

The Bouroullec brothers are masters of reinterpreting archetypes in ways that transform them.  Their slow chair dematerializes the Saarinen's womb lounge chair.  Their steelwood rematerializes the hideous plastic patio chair with powder coated steel and ash.  And now their Baguettes Chair for Magis (pics above) takes the gesture of the classic steel folding chair and creates something warm and elegant.  Not exactly what the steel folding chair evokes for most.

They've taken away so much of the chair.  What's left are just 4 solid wood legs, a plywood seat and back plus a secret ingredient.  The magic glue comes from a clever die cast aluminum frame that is neither completely hidden or an eyesore.

While there are no truly original ideas out there, there are an infinite number of recombinations.  That makes the good ones all the more rare and delightful.
Posted by Unknown at 12:36 PM No comments:

I have been a space junkie from the day I could figure out what outer space was.  Part of that was being lucky enough to be a little kid during the age of the Apollo flights--when space travel was a national event.  Everyone stopped what they were doing and paid attention.  There was a sense that we were witnessing some of the greatest achievements in human history.  And we were.

Having grown up steeped in the imagery and lore of the Apollo program--I'm always amazed at how the Russians did it.  There's the famous story about NASA spending $1M developing a pen that would write in space, and the Soviets brought a pencil.  That sums up so many aspects of the different attitudes and approaches that the US and USSR took towards space flight.  At the end of this video, somebody's marking the site of the landing with a railroad spike and an axe, for pete's sake!  A far cry from getting picked up by a nuclear powered aircraft carrier.

This recent article in the New York Times Magazine really brought to light how wildly different the two worlds were.  There was no countdown--just a warning that "after the one minute readiness is announced, there'll be about six minutes before you actually take off."  ABOUT SIX MINUTES?  Wow.  Read the article to learn how Vladimir Komarov, a later cosmonaut, knew he was being sent to his death because the rocket was unsafe.  Not exactly Apollo 13!

But its invaluable to remember that fear of Sputnik and Gagarin created the boom in scientific education in the United Staes, and the subsequent boom in science and technology that brought us to the future.  Internet anyone?

Obama has been talking about how renewable energy could be our Apollo.  Emphasis on could.  Its not yet.
Posted by Unknown at 9:50 AM No comments:

Complexity is not magic, its even better than magic.

If you take it for the tipsy dinner party rant that it is, this is pretty awesome.  I mean, part of the reason "alternative medicine" ever becomes "medicine" is because somebody opened their mind to it, and had the training and resources to study it.  Science has enormous blind spots about all kinds of human experience, not to mention all of the things that we just can't imagine yet--which is a lot of stuff.

But having said that, this is pretty much on the money.  It also shows that saying something warm about your wife near the end of a rant, it takes the edge off a bit.

I'd like to thanks my adorable wife, who found this video and saw something endearingly familiar in our loud mouthed but spot on, shaggy-esque protagonist.  That strikes me as a good sign.

Take that flying spaghetti monster!
Posted by Unknown at 5:06 PM No comments:

I've seen many of the shorts that Jim Henson did for IBM in the middle 60s.  But these spots for Wilkins Coffee are absolutely (sometimes literally) mind blowing.  The message is simple.  Drink Wilkins coffee or we will kill you.  No quality claims.  No thoughtful reasoning.  Just the timeless humor of violence, told with a straight face.  Genius.
Posted by Unknown at 8:51 AM 1 comment:

A Slice of Life


Source Data for Photography/12:31 from Croix Gagnon on Vimeo.


There are so many ways of seeing.  This is a cool one.
Posted by Unknown at 1:44 PM No comments: