Wow.  That looks super fun.  126mph is the new worlds record for sailing on land.  And I thought I had the only proa land sailer!  And not only is theirs a proa, but it uses aerodynamic ballast!  To keep it from flipping over, the heeling force of the wing is counteracted by a horizontal foil shaped strut between the main body and the outer wheel, that's generating negative lift.  So as the wing is trying to tip it over, the foil shaped strut is trying to push the outer wheel into the ground.
If you watch closely while he's setting the record, the both the wing and the strut get all willowy and soft looking.  He's holding it right there, in that place before it explodes.  Beautiful!
Congratulations Ecotricity.  And as if it needs to be said, proas rule!
I guess I have to dig up my old Palindrome videos to celebrate!
Posted by Unknown at 3:34 PM 1 comment:

Design Education in a Nutshell

I've been thinking a lot about design education lately. My friend Maria and I have been working on developing a prototype-centered class. Sort of a build-to-think kind of thing. In honor of this momentous occasion, I'm posting one of my all time favorite YouTube moments (other than this), Eric's Really Good Idea. The idealism! The obfuscation! The shattered dreams! The triumph of jargon!
"I don't have time to demoralize all of you individually, so lets just say I'm thoroughly disappointed in the lot of you...now who wants pudding?"
Those were the days...
Posted by Unknown at 4:44 PM No comments:

Get Your Fix On 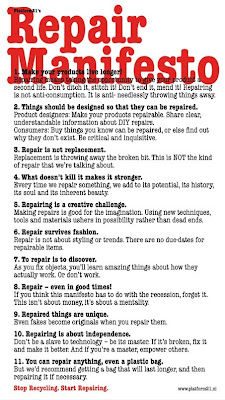 Dutch design collective Platform 21 has done something you don't see that much anymore--they wrote a manifesto.  Manifestos tend to be a bit petulant, and hence have a short life span (the communist one not withstanding).  But this one has legs.  Maybe its because it's good old fashioned stinginess repositioned as a mentality.  I love it.  I especially like #2, about designing for repair.  Its no secret that durability is a far more potent sustainable practice than recyclability or even being made from recyclable materials.
Herman Miller's decision to make the Eames shells out of recyclable, but also more scratchable, less luxurious feeling plastic always bothered me.  When was the last time you saw a fiberglass Eames shell in the garbage?  My orange rocker is on its second base and third set of rubber pucks.
Design for repairability is a huge opportunity that spans from materials and finishes to creating objects simple enough to fix.  For example, the heater broke in my 1999 BMW.  I had to buy a $500 computer to fix it (and its still glitchy!), and have an expert replace it.  When the heater broke in my 1969 Fiat, all it needed was a $15 piece of cable and 20 minutes of my labor.  Modern cars have added feature after feature, and we have paid for that in weight and complexity.  To help compensate for the cost of all that bloat, the car is designed to be snapped together once with a minimum of labor, without regard for the poor bastard who has to fix it.
We need repairability to become a mentality to get over our collective preference for shiny garbage over quality and character.  Myself included.
Posted by Unknown at 3:39 PM 1 comment: 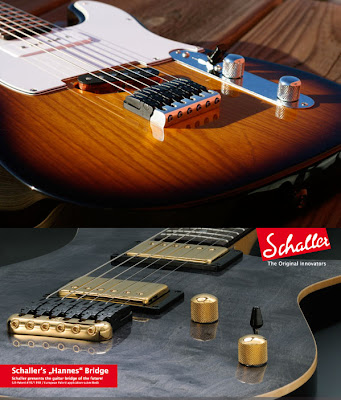 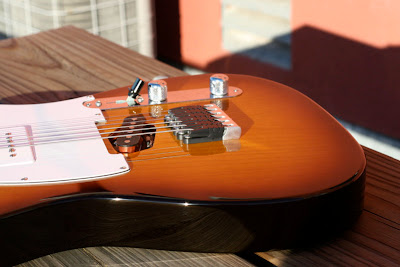 At long last my website has been updated to include some more recent work (or at least recent work that I can talk about publicly).  Thanks Ed!  So I'll preview one of the goodies from the site (click on "one offs" and then "hannes bridge" for more pix.

My friend and long time guitar tech Stephen White introduced me to Roland Hannes around 2002.  Roland had invented a very clever bridge for electric guitars that was revolutionary in a couple of ways.  For one, the individual saddles sit right on the wood top of the guitar—not a metal plate screwed to the top of the guitar.  And there are a lot of other cool, painstakingly thought out features.  I hooked him up with a machinist friend of mine, who helped him get a prototype built.

Roland licensed his invention to Schaller, an instrument hardware manufacturer in Germany.  And in January of 2008 I had a chance to play one of his bridges myself.  I was absolutely blown away.  Unplugged, the guitar had a resonant, ringing, quality that I had rarely heard in a guitar. I decided on the spot that I needed to build up a guitar around the bridge.  I had been jonesing for a telecaster anyway.

The only problem was, I didn’t like the aesthetics of the anchor block of the bridge.  It just didn’t look right to me.  The saddles and anchor don’t speak the same design language. The saddles are boxy and the anchor in Roland's version was blobby.  And there is NOTHING blobby about a telecaster. So I redesigned the anchor. The result is a bridge that looks A LOT better, and is more comfortable to play.  Too bad I didn’t have a chance to redesign it before it went into production.

But at least mine looks right.

Posted by Unknown at 3:27 PM No comments: 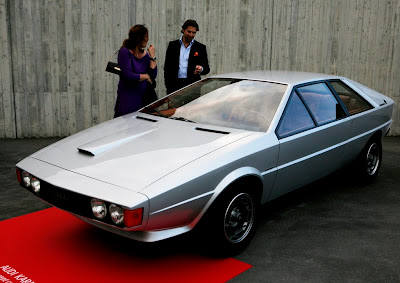 Giorgetto Giugiaro drew the 70's.  Along with Marcello Gandini, he was the master of the folded paper styling that defined the cars of that era.  Mr. Giugiaro drew the the original VW Golf and  Lotus Esprit--two wildly different cars which are almost re-proportioned versions of the same design.  And they've stayed relevant ever since with a slew of hits that include the Lancia Delta, Fiat Panda, Saab 9000, Isuzu Impulse, Subaru SVX and Alfa Brera.  That's a hell of a run!
Check out this fantastic (but flash based) video voyage through Italdesign's proud history.
Posted by Unknown at 8:42 AM No comments: