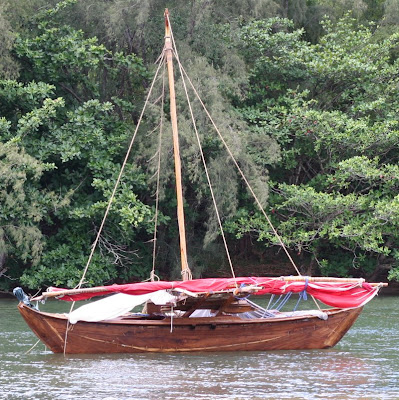 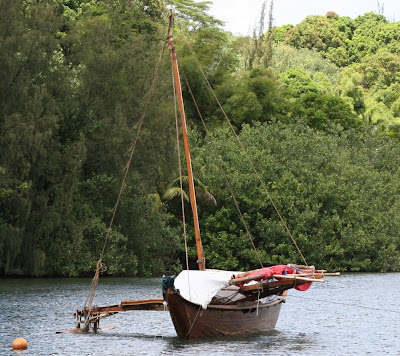 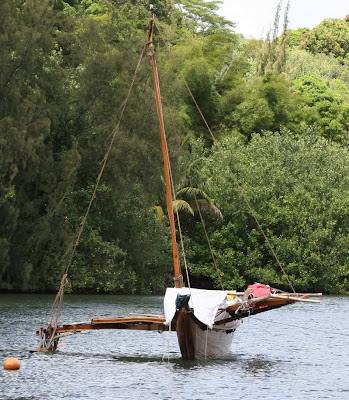 I am a proa nut.  I built the first, and as far as I know only, land sailer proa.  I think WAY too much about proas.  And what's even weirder, is that there has been an explosion of folks who think way too much about proas around the world, thanks to the electronic interweb.
Ok, so a proa is a two hulled sailboat, kind of like a catamaran.  Unlike a catamaran the hulls are not the same size--one is little and it stays on the windward side.  Instead of tacking, you flip the rig around and sail off in reverse.  They are just as symetrical as other boats--its just that they are symetetrical front to back, not side to side.
Sounds like a hassle (and it is) but here's the catch.  Proas are faster than other boats, pound for pound.  See, instead of carrying around a big heavy thing under water (a keel), like modern monohulls do, they carry a not very heavy thing next to them (the small float, or ama).  When the wind hits the sails, it wants to lift the ama up, out of the water.  Its like taking a broomstick and putting a small weight at the end.  The further out you put that weight, the harder it pulls.  Then you get to tie a rope to your weight and attach that rope to the rig--so all the pull from the rig goes straight to the weight.  Pretty cool.
20th century trimarans focused on the other direction--pushing hulls down into the water, and using buoyancy to push back.  Don't get me wrong, its a great plan.  But as you push into the water, you create drag, and big stresses on the boat.  As it powers up, the proa loses drag as the ama lifts, and it can be made pretty flimsy (=light) because of that cool rope that lifts up the ama.  Its a recipe for fast.
And who wrote that recipe?  Pacific Island Seafarers devised these ingenious craft thousands of years ago.  Perhaps the most amazing thing (or the reason they exist at all) is the quality of the materials they had on hand--breadfruit logs and coconut husks.  Seriously.  Captain Cook wrote about seeing proas shooting around at 20 knots, while his ships were lucky to make 8 and effectively didn't go up wind.
So imagine my surprise when I saw a Marshallese Walap (the king of proas) bobbing away in the mouth of the Hanalei River in Kauai last summer.  My first proa-nerdy thought was," hey, that's not a Hawaiian craft."  I learned that she was built by Robert Po, a Hawaiian Independence activist and cultural leader type.  It struck me as strange that they would not build a local traditional craft, but hey, maybe they got caught up in the whole proa fever thats sweeping the globe.
She looks to be built from Koa or some other gorgeous Hawaiian hardwood.  A hell of a lot nicer than breadfruit wood, I say.  Sure would love to go out on that beauty.
To learn more about Proas (and then think way too much about them) check out Michael Schacht's Proafile.  Here's his awesome proa primer  link.
Oh, and here's my proa land sailer, Palindrome.
Posted by Unknown at 3:20 PM